In the past, institutional adoption of cryptocurrency has been slow and difficult. But in 2021 a few events ushered in mass acceptance at an accelerated pace. These metrics will help you understand why this year is groundbreaking for institutional investment into crypto assets 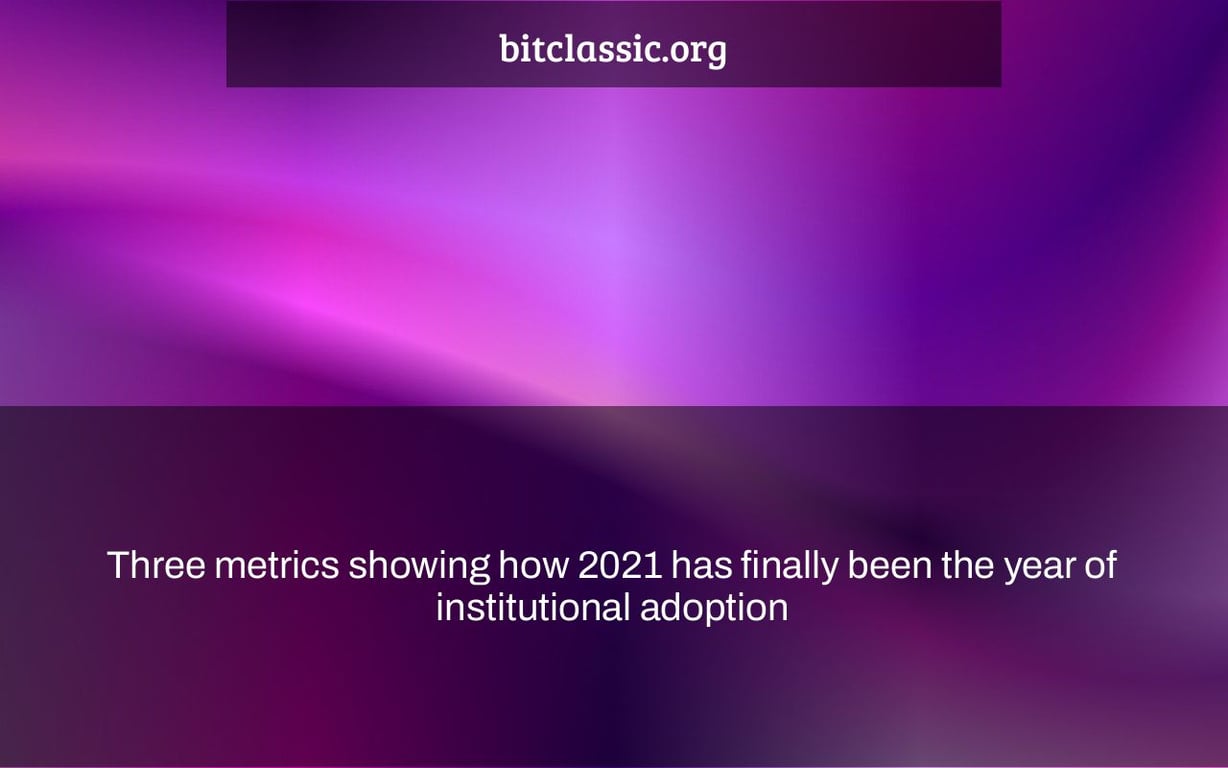 If you’ve been around crypto for a while, you’ve probably heard the term “institutions are coming.”

It even became an overused joke by investors mocking a segment of the market’s unrealistic aspirations for Bitcoin’s price increase. Institutions openly investing in cryptocurrencies was uncommon before to COVID-19, but interest in cryptocurrencies has exploded in 2021.

Tesla’s $1.5 billion BTC investment was one of the most well reported examples of institutions joining the crypto market. Microstrategy, a publicly listed company in the United States, was acquiring Bitcoin before them. They continue to acquire BTC at every downturn, and their holdings currently total $3.66 billion.

Not only have businesses joined the game, but El Salvador was the first nation to recognize Bitcoin as a legitimate legal tender. Meanwhile, even US governments are contemplating involving themselves in Bitcoin, such as Miami, which is proposing giving Bitcoin dividend to its inhabitants. Because of the open nature of the blockchain, everyone can see the trails that these institutions leave behind and compare their influence over time.

These are just a few of IntoTheBlock’s many on-chain measures that show how institutional money is flooding into blockchains in 2021.

The volume of major Bitcoin transactions has grown by 5 times.

Bitcoin has benefited the most by absorbing the majority of this demand. Aside with its price action more than doubling this year to about $70k, there are various signs indicating that not only has the price climbed, but so has the quantity transacted in the blockchain.

According to IntoTheBlock Bitcoin Transactions Indicators, as of December 15th.

This indicates how much money is transferred just on the Bitcoin blockchain, and ignores the large transfers that have occurred on other blockchains. The year 2021 will be remembered for the widespread use of smart contract platforms like as Ethereum, Solana, and Avalanche.

Because of the high demand for Ethereum, a single transaction may cost up to $50.

Institutional demand has been continually seeking exposure to the returns that decentralized finance (DeFi) provides. The returns offered in traditional finance are often an order of magnitude lower than those available in DeFi.

The ‘king’ of smart contract blockchains is still Ethereum. Despite losing market share in the final few months of the year, it is still the one with the greatest liquidity, alternatives, and risk-averse procedures.

The average transaction costs in US dollars are a useful measure of how popular the Ethereum chain is. Fees paid in dollars are also affected by the price of ETH, which helps to gauge demand since ETH is required to utilize the network.

According to IntoTheBlock Ethereum Fees Indicators, as of December 15th.

Transaction costs are one of the most basic types of fees, although other types of transactions, such as token swaps on decentralized exchanges, have lately exceeded $400 per transaction.

Taking the total daily costs paid in the Ethereum blockchain and dividing it by the number of daily active users, one can calculate that each active Ethereum address pays $413 in fees per day on average for utilizing the network. Many retail consumers may not be able to pay that amount, indicating that the blockchain may be used by a majority of institutions.

The number of USDT addresses has increased by a factor of two.

Stablecoins are now required for each cryptocurrency investor to utilize at some time. Either by allowing people to send money through the blockchain or by allowing them to purchase and sell bitcoins. It necessitates the use of stablecoins. And USDT is still the most often utilized asset in cryptocurrency trading pairings that take place on centralized exchanges, where the vast majority of the volume exchanged takes place.

Institutions often need to transfer funds across centralized exchanges or via custodial services. As a result, the number of addresses utilizing USDT is a fantastic indication of activity.

The following graph depicts the historical variance in the number of addresses with a balance who have directly interacted with USDT. It’s easy to see how it went from 1.99 million addresses on January 1st to 3.9 million at its peak in December.

According to IntoTheBlock, USDT Addresses Indicators as of December 15th.

Institutions are already ‘here,’ as these signs suggest. They employ DeFi technologies and invest in several cryptocurrencies. Aside from recent crypto market volatility in the context of current economic uncertainties, institutional investors’ interest in crypto continues to grow, according to recent polls.

Juan Pellicer is a systems engineer and research analyst at IntoTheBlock who is interested in DeFi, stablecoins, derivatives, synthetic assets, and non-fungible tokens.

The “crypto meaning” is a term that has been used for quite some time. It refers to the money or assets that are not physical, but rather digital. The year of 2021 has finally been the year of institutional adoption.

Are Dancers next to take the leap into the Metaverse?