Using solid business fundamentals, Avalanche has grown its revenue by 504% in 2018. Having raised $41 million over the past year, it’s one of the strongest blockchain projects with a proven ability to bring new users into their ecosystem. The three major factors driving this growth are adoption, awareness and usability. 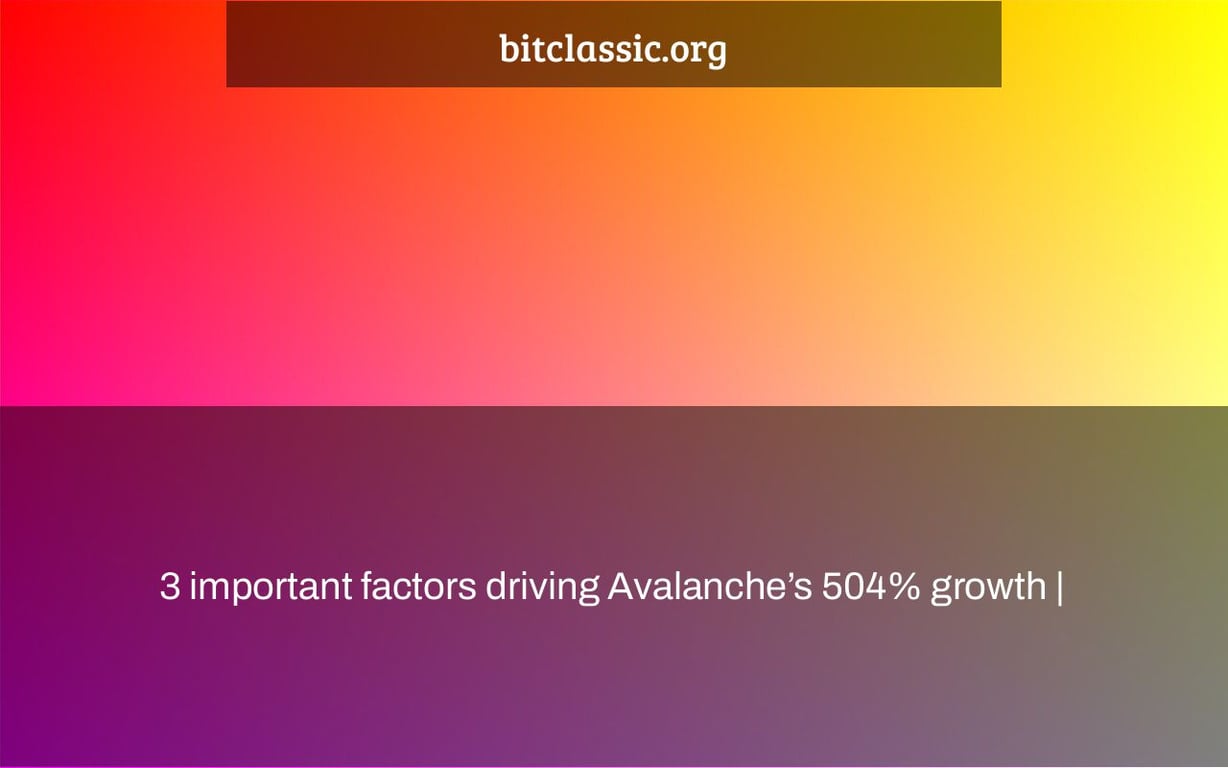 Avalanche’s TVL has climbed from $2.3 billion to $13.9 billion since Footprint’s last report on the company in September, “Avalanche Gains Momentum as Blockchains Battle Breaks Out.” 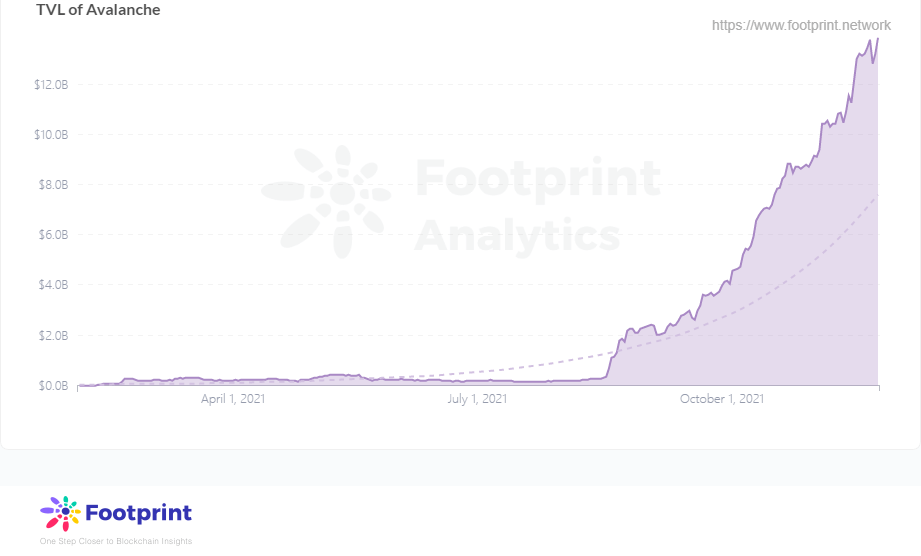 1. Long-term support for the ecosystem

Avalanche Rush, a $180 million liquidity mining incentive scheme introduced by the Avalanche Foundation on August 18, was the catalyst for Avalanche’s initial rise. The project’s incentive structure has been beefed up since then. Benqi, a native lending initiative, also partnered with the Avalanche Foundation to establish a $3 million liquidity mining incentive program, giving AVAX and protocol token Qi to users that borrowed on Benqi, which in less than a week achieved the highest TVL protocol on the chain.

The Avalanche Foundation re-launched a $200 million fund (Blizzard) two months later, with the goal of incentivizing four main sectors of the Avalanche ecosystem (DeFi, enterprise apps, NFTs, and cultural applications), as well as looking for new emergent applications. Equity investments, token purchases, and different types of technical, commercial development, and ecosystem integration help are all part of Avalanche’s support for the project.

Avalanche’s external ecology is likewise growing. Shopping.io, a well-known crypto e-commerce site, has announced support for consumers to purchase on Amazon, Walmart, eBay, and other platforms using Avalanche’s token AVAX, with a 2% discount in certain cases.

Wyre, a cryptocurrency payment infrastructure provider based in the United States, has integrated its payment network into Avalanche’s ecosystem, allowing users in more than 50 countries/regions to convert nine currencies to AVAX, including the US dollar.

2. A multi-chain structure that is powerful

Avalanche is a proof-of-stake blockchain that uses three main chains, which sets it apart from other blockchains. Using distinct data structures, each of the three chains takes on a different duty.

X-Chain is an acronym for “cross-chain” (Exchange Chain)

C-Chain is a kind of chain (Contract Chain)

Due to the sophisticated multi-chain, transaction costs were previously expensive when compared to other blockchains. In August, Avalanche triggered the Apricot Phase Three update to improve API calls, which resulted in a 66 percent reduction in transaction costs.

Avalanche has been able to boost total transaction speed on the chain, with a TPS of over 4500, thanks to this method, while the lower transaction costs offer Avalanche a better transaction experience than Ethereum. Users may now quickly migrate their assets from other blockchains thanks to the implementation of Avalanche Bridge, a native cross-chain bridge.

3. A dApp environment that is developer-friendly

EVM compatibility makes it simple for Ethereum developers to convert their dApps to Avalanche. Unlike other blockchains that concentrate on their own dApps, Avalanche deploys early to bring in the most popular Ethereum protocols, resulting in increased growth and attention.

Aave and Curve, the two most popular Ethereum DApps, have been deployed on Avalanche and provide around 33% of TVL, with Aave swiftly surpassing Trader Joe and Benqi at the head of the pack following its October debut.

The number of Avalanche procedures worth more than $100 million in TVL jumped from four in August to twelve in November, with five worth more over $1 billion. Avalanche Fund also stated in November that it will launch a three-month liquidity mining incentive program with SushiSwap worth $15 million, half of which would come from each portion.

Avalanche’s own protocols, in addition to Ethereum’s, have expanded fast because to multiple incentives.

Despite being the first player on Avalanche, Pangolin has been a gradual ascension in TVL in the DEX category. Trader Joe’s, on the other hand, has risen to the top of the DEX with $2.3 billion in sales since August. Trader Joe not only trades, but also lends money and manages liquidity. Users may convert a single asset to LP capital, which offers liquidity via a simplified transaction, for a one-stop shopping experience.

Benqi, the native lending initiative, has a generally consistent TVL in the loan category. Benqi’s TVL experienced a setback as a result of Aave’s airdrop in October, but it has since returned to its old height of $1.7 billion, although its market share has been steadily devoured by Aave. Benqi’s services include lending and liquidity mining, as well as depositing protocol tokens QI and a range of stablecoins, WETH, WBTC, and other Ethereum cross-chain and Avalanche assets.

In the yield category, Yield Yak, Avalanche’s initial yield protocol, has a TVL of $700 million and is dedicated on reducing slippage for customers while trading. Yield Yak makes money by farming in each protocol, which is automatically compounded and supports stablecoins, single tokens, and LP Tokens at the moment.

Avalanche is now rated fourth among all blockchains in terms of TVL and is expected to continue to rise. Avalanche’s token, AVAX, is also on the rise, having almost doubled in price since early September. At $205, it was only behind ETH, BNB, and SOL at the end of November. 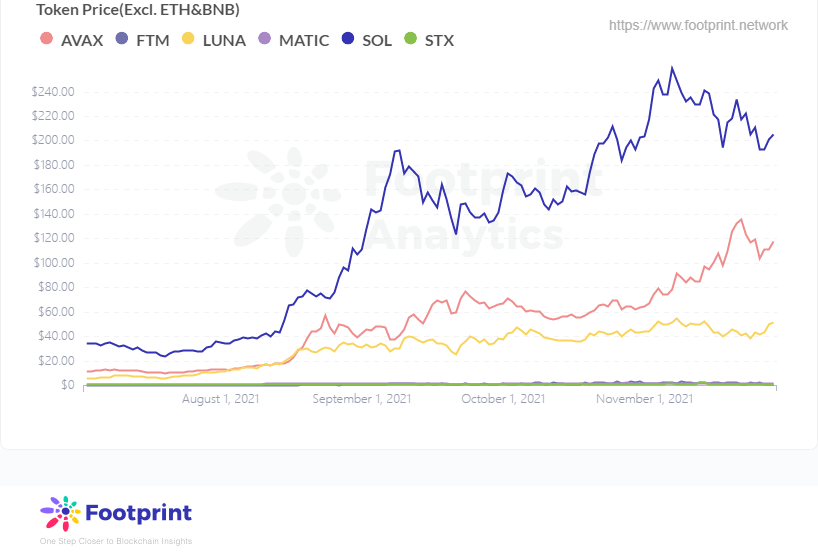 Token pricing on smart contract platforms, according to Footprint Analytics

The preceding information reflects the author’s own thoughts and opinions and is not intended to be taken as investment advice. Feedback is requested if there are evident flaws in understanding or data.

What does it mean to have a footprint?

Footprint Analytics is a one-stop shop for analyzing blockchain data and uncovering insights. It cleans and combines on-chain data so that users of any skill level may begin exploring tokens, projects, and protocols right away. Anyone may create their own personalized charts in minutes using over a thousand dashboard templates and a drag-and-drop interface. With Footprint, you can discover blockchain data and invest more wisely.